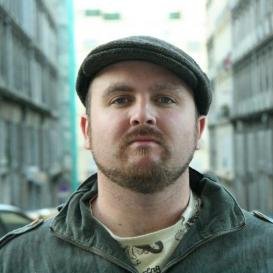 It’s been a solid decade since Hip Hop ruled the world. There was a time before the main-streaming of EDM, before the indie explosion, when the charts were dominated by what was perplexingly referred to as ‘urban’ music. For us in the UK it began with the defiant subversiveness of Eminem and faded to the tune of 50 Cent’s ‘In Da Club’. Since pop-culture became disinterested in the so-called ‘urban’ lifestyle, Hip Hop has returned to its underground roots, which was one of the best things to happen to the music since its inception.

One of the best representatives of Hip Hop’s return to the realms of authenticity is Los Angeles based producer Exile. Managing to progress the music while simultaneously respecting its roots as a gritty expression of American sub-culture, Exile’s manipulation of sound using his MPC sampler is something that any fan of music and art should experience. Here are 5 reasons why Exile should be one of your favourite artists.

1. He made an album entirely out of samples from Los Angeles Radio

Wanting to release an instrumental album in the vein of Flying Lotus, RJD2, or DJ Shadow, but not content with the usual method of digging through vinyl and piecing dusty samples together (something which he is, however, also very good at), Exile decided to sample the radio waves from his home town for his instrumental offering.

The album was released under the fitting title of ‘Radio’ and is made entirely out of mashed up Los Angeles radio samples. That is, there is not one element of it that was produced using instruments.

Writing about the album in the liner notes, he described it as “a multi-track, Hip Hop pause tape of grand proportions that journeys the spaces between schizophrenia and serenity.” I’m still not entirely sure I know what that means, but I couldn’t think of a better way to describe the album.

Listen to track ‘Mega Mix’ for an example of the man’s creativity. He uses the white noise from dead radio space as a scratch sound and the volume fader on his MPC as a cross fader to mimic the sound of scratching vinyl.

2. He’s in a Hip Hop group with Aloe Blacc

That’s right, the popular crooner of ‘I Need a Dollar’ and ‘Wake Me Up’ started out as an underground MC who teamed up with Exile to form rap group Emanon (‘no name’ backwards) and released 3 albums.

On Exile’s 2011 mixtape ‘Intro to the Outro’ a new Emanon track was included suggesting that the two would be teaming up once again for a new project. Details have been sparse since.

3. He made a modern underground Hip Hop classic with rapper Blu

Of those that know who Exile is, chances are they came to him through his 2007 album ‘Below the Heavens’ with Los Angeles rapper Blu.

The album has been hailed a modern classic by critics, leading XXL magazine to publish this ‘making of’ feature, the kind usually reserved for mid 60s and 70s classics, only 5 years after the album’s release.

It is difficult to sum up the greatness of ‘Below the Heavens’ succinctly. The multi-layered samples on each track evince the respect Exile has for the art form’s roots whilst still managing to sound new. Blu’s infinitely complex wordplay and discussion of serious subject matter on tracks such as ‘Cold Hearted’ perfectly compliments the music, leading to one of the most multi-layered, well crafted, and genuinely engrossing Hip Hop offerings of the post-urban age.

Listen to the above track ‘Cold Hearted’ for an early appearance by the now well known singer Miguel who went to high school with Blu.

4. He released an MC album recorded entirely on a 4-track recorder

Long after Eminem lost his subversive edge at the hands of Rihanna crooned choruses and self-indulgent explorations of his own drug problems, Exile unleashed the delightfully bizarre ‘4TRK Mind.’ Picking up the baton of oppositional weirdness where Eminem dropped it, Exile proved with his MC debut that sometimes less can mean so much more when it comes to creativity.

Every perfectly chopped sample and dusty drum loop that make up each track was put together by the man himself. But it is the low-fi vocal recordings, as irreverent and vulgar as they are revealing and heartfelt, and recorded entirely on a 4 track recorder, that make this album genuinely intriguing.

Anyone who has seen a live Exile set will know that the centre-piece of the whole thing is when he goes crazy on his MPC. Using the sampler to create live production, the resulting effect among the crowd is equal parts amazement and hype.

There are numerous videos of him re-constituting chopped up pop hits into monster tracks, including this reworking of Jay-Z’s Holy Grail.

And if loud Hip Hop beats are not your thing, check out this demonstration of him building a smooth ambient track from his ‘Radio’ album.

You can also get a more intimate demonstration of his MPC skills along with an explanation of his approach to making music below:

This list could extend much further than 5 points. I have been lucky enough to see Exile live several times and have never been disappointed. Keep an eye out for him the next time he and his Dirty Science collective tour the UK, and if you’re ever in Los Angeles he is constantly DJing and performing with the artists on his record label. Fans of Hip Hop will be glad to see the music thriving in its native underground habitat, but fans of music in general should appreciate Exile’s refreshingly strange, progressive, and most authentic of takes on creativity.

Have your say on Exile’s music in the comments section below.