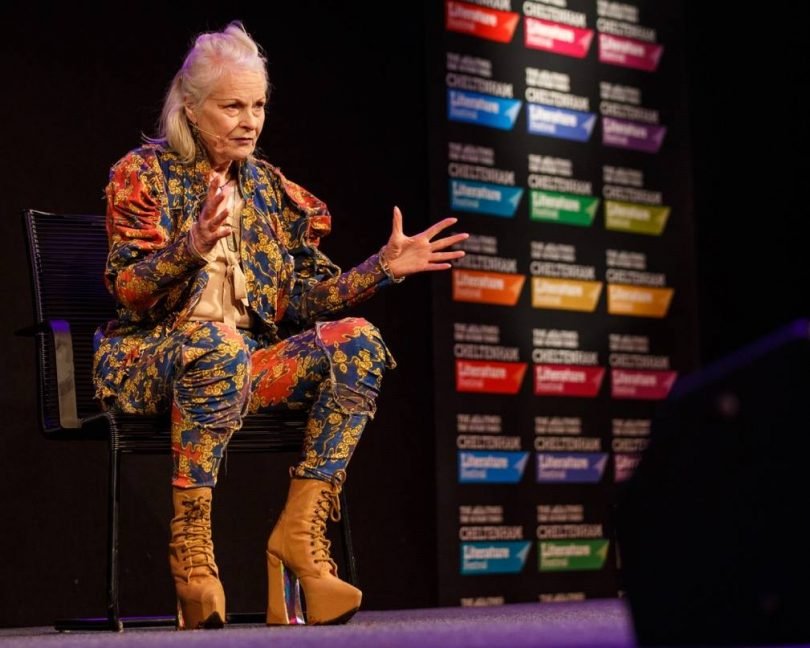 "There is nothing like a dame and certainly not this one." Kirsty Wark's introduction of Vivienne Westwood at this year's Cheltenham Literature Festival couldn’t have been truer. The fashion-designer-cum-self-proclaimed-activist was one of the year's most hotly anticipated talks at this year's festival, and festivals editor Laura Brown headed down to hear what she had to say.

In a change from the usual format of most talks at the festival, Westwood was given time at the start of her hour to talk through her latest work, of which she had handed out leaflets to each audience member pre-show. Her ideas centred around what she had dubbed the 'rotten financial system', which mainly considered the idea of the 1 million controlling the 7 million. Though not a new idea, her passion for it and own ideas of what to do about the issue came over as being something she had clearly given a lot of time and thought too and had already invested a lot of feelings in to.

Green energy and her feelings towards politicians were the centre of the entire hour, but especially during this introductory talk. Westwood expressed how she felt that all politicians were the same and that there often seems like no real opposition because of this, she did, however, offer up one. This was in the form of charities and organisations such as Oxfam. However, it was her views on current politicians, in particular Theresa May, Hillary Clinton and Donald Trump, with a mention of Obama and Putin, that were the most prevalent throughout and were ones that were occasionally met with some mixed emotions.

From the more mild comments of 'bad people' and 'all rotten' to suggesting that they all have no empathy, are power driven and the suggestion that Prime Minister May was 'a wasted life,' Vivienne Westwood did not hold back. Whilst the audience were occasionally unsure what to make of these remarks, Westwood was articulate in explaining her feelings and stood her ground on exactly where she stood. She questioned the constant repetition of 'we' in particular reference to the European Union campaign and who 'we' really was and referred back to her earlier ideas of the million controlling the 7 million. It was very clear that she felt all these people were against those who weren't them, and suggested that many of the policies and things they do that may seem good are actually there for their own benefit.

Being such a public figure and one who has such strong feelings towards political issues, which many find difficult to connect with, Kirsty Wark managed to bring out a real personal side to Westwood and a world that many never get a glimpse in to. Being an unsurprisingly busy woman with social activism and a fashion empire to run she spoke on how she makes time to take on a sudoku challenge to keep the brain active and take some time out from things, but yet still doesn't have time to host dinner parties and entertain; "I have lovely dishes and I never use them!"

When speaking about her other half, both romantically and creatively, Andreas, and the secrets to what kept their relationship alive, Vivienne said it was down to two main things; that they do not argue and that he keeps her brain stimulated. It was during these moments in the talk that a real honesty was shown, in a different way to the passionate honesty that had come before. Being such a larger than life character it brought it back to that fact that she is just like everyone else underneath.

It is undeniable that Vivienne Westwood is a force to be reckoned with. She is everything you would expect her to be and more, and her real emotions and passion towards the subjects she feels the strongest about mean it is difficult to not feel inspired and drawn in. She will continue to do all she can to get a greener landscape both politically and environmentally until she achieves her goals. There is certainly no stopping Vivienne Westwood.