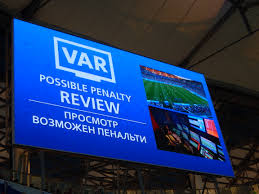 So that’s that then. When Hugo Lloris lifted the World Cup trophy high above his head in the Luzhniki Stadium in Moscow earlier this month, he brought the curtain down on an incredible summer of football.

We’ve had plenty of goals, drama, shock results and entertainment. For a moment it even looked like football would come home.

Yes, despite all the off-field negativity surrounding Russia 2018 pre-tournament, the World Cup has been a resounding success.

Unfortunately, one of the defining images of the tournament will be the ball striking the arm of Croatia’s Ivan Perisic as he jumped to defend a corner against France in the final.

Referee Nestor Pitana was advised to consult the video assistant referee, and after minutes of deliberation awarded a penalty to France in what proved to be a decisive moment in the tournament.

It was a horrible decision that further shone a spotlight on what the previous 63 games have taught us: VAR hasn’t worked.

Granted, it hasn’t ruined matches like many predicted it could. Those of us who watched from behind the sofa as a string of VAR-assisted decisions at last year’s Confederations Cup saw the tournament descend into chaos and confusion, feared what could happen when the pressure was on and the stakes were highest, whilst anyone who saw Mainz get awarded a penalty during half-time in their Bundesliga match with Freiburg had to wonder what we could be in store for this summer.

Fortunately (except for the second half of Portugal v Iran) it didn’t end up ruining the spectacle of the football on display; the matches were still entertaining and weren’t stop-start.

There were even occasions where we saw what VAR is capable of: South Korea’s opener against Germany, where VAR picked up on the fact that the final touch had come from Germany’s Toni Kroos and that therefore Kim Young-gwon was onside when he scored, was a great example of VAR in action; cameras picked up on what was missed by everyone in the stadium, the referee quickly rectified himself and the correct decision was made. Similarly, VAR’s overturning of the decision to award Neymar a penalty for a blatant dive against Costa Rica proved that the technology works in the literal sense; picking up on the incident and gave the referee the chance to correct his mistake.

But video technology was introduced to – as FIFA themselves put it – eradicate ‘clear and obvious’ errors. Essentially, it’s here to put an end to all the ‘what ifs’ that fans are left with after a poor decision; to ensure that the post-match discussion and debate is on the football and not the officiating. That hasn’t been the case. For every decision that made us think VAR could be the answer, there were four of five decisions – or non-decisions – that have left us wondering: what is the point?

Nothing has changed. Referees are not being guided. They’re still making the correct decisions and they’re still making the incorrect decisions, only now they sometimes get advised to go to the side of the pitch and take a second look. I say sometimes because the decision to refer the on-field referee to the screen seems completely random. Why is an Iranian player heading the ball onto the arm of Portugal’s Cedric Soares from point blank range deemed referable, but the wrestling to the ground of Harry Kane by Tunisian defenders was ignored? Nothing has been cleared up; bad, game-changing decisions are still being made; incidents are still being missed and fans are still as frustrated with referee’s as they’ve ever been.

That’s the thing about football: very few decisions are black and white. Two people could see the exact same incident and view it completely differently. That’s human nature. Ultimately, referees are going to get things wrong no matter how many times they see an incident. But what’s particularly frustrating is that they’re making decisions that are simply not clear and obvious errors, yet they’re being referred to VAR anyway. Why waste so much time reviewing the footage and leaving everyone more confused than ever, when ultimately the decision is still one referee’s opinion?

I have some sympathy for the referees. If they’ve made a call, and then been told in their ear to go and have a second look at the side of the pitch – whilst the world is watching, no less – then surely it becomes natural to second guess yourself and assume you’ve made the wrong decision? That’s why it leaves such a sour taste in the mouth when the referee in the World Cup Final can wave play on after a handball incident, only to overturn a decision nobody was questioning after being told to go and review the footage. VAR was introduced to help the officials as much as the players and the fans, but the voices in their ear and the eyes on their back don’t appear to be doing them any favours.

Ultimately, whilst there is confusion about its application, VAR will never truly be embraced as the future of football – no matter what FIFA try to tell us. It’s here to stay though, I just hope in future it isn’t applied so randomly. Limit it to obvious offside errors and to punish blatant diving. But as long as it’s being wheeled out for marginal decisions left, right and centre, it’s only going to create more controversy than it prevents. I just hope that by the time we get to Qatar in 2022 we all understand what a clear and obvious error is.