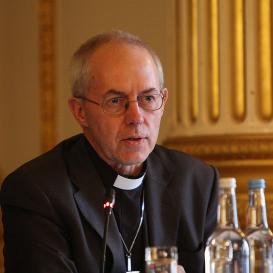 It’s ‘absolutely outrageous’ to say people who fear the effects of migrant are racist, the Archbishop of Canterbury has said.

Justin Welby told House Magazine that some people genuinely fear the impact the “colossal crisis” will have on jobs, the NHS and housing in Europe, and these “reasonable” anxieties should be listened to.

In relation to the EU referendum he said that the UK should be “taking its share of the load”, and a response to this great movement of people was needed at a European level.

He feels that David Cameron’s pledge to take 20,000 refugees is “pretty thin” and we should be looking to the commitments of Germany.

England recieved only 60 asylum applications per 100,000 local populations in 2015, Eurostat have revealed. This is 200 less than the European average.

The most senior cleric in the Church of England also stated there is no “correct Christian view” on whether or not the UK should leave the EU, as God would not say to vote one way or the other.

Regardless, he calls for a “visionary debate” on the EU referendum, because the lack of a Europe-wide solution is deepening the crisis significantly.

This debate should discuss the UK’s global role and how we fit in the world rather than being “all about us”, he also said.

Politicians in Westminster are in disagreement over whether the UK should leave the European Union.

Justin Welby demands that those who support the ‘Brexit’ to think about the future of the UK’s attitudes and values.

He said: “And from those who want to stay, how would we change the European Union? How would we make it more effective if we remained in it? What’s our vision?”

Justin Welby’s comments are the most significant representation of the Church of England’s opinion on the migrant crisis to date.

Independent writer Rachel Shabi has since hit back at his suggestion that fears of migration aren’t racist.

He also told House Magazine: “This is one of the greatest movements of people in human history. Just enormous. And to be anxious about that is very reasonable

“There is a tendency to say ‘those people are racist’, which is just outrageous, absolutely outrageous.

“There is a genuine fear. And it is really important that that fear is listened to and addressed. There have to be resources put in place that address those fears.”