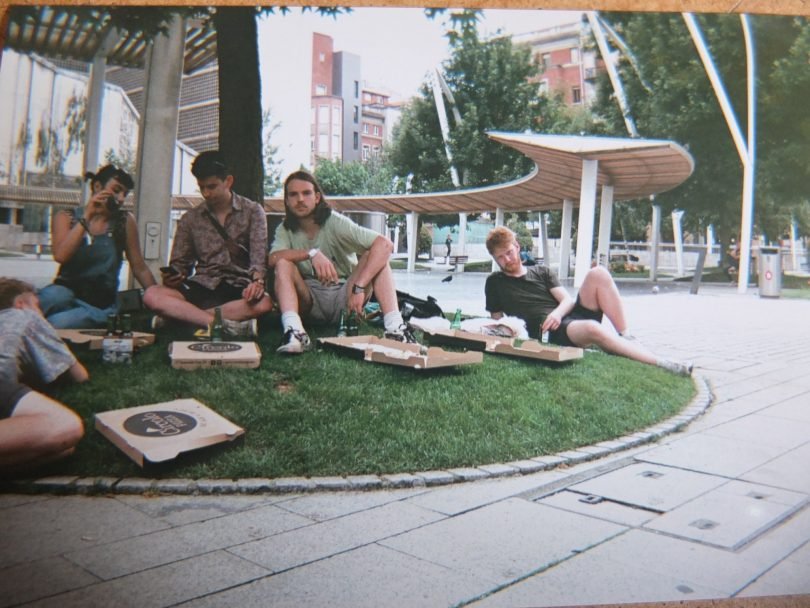 We arrived at the festival camp site around 11 AM. We were beaten there by the rest of group. They won the prize of setting up the tent. Tom and I took great satisfaction from that, until three days later, sunburnt and hungover, it fell on us to dismantle the bitch.

But, back to the beginning, and that thought hadn’t crossed our minds. We arrived under the Spanish Sun, to an idyllic campsite with views stretching over the Bilbaine bay. The ground was lumpy, but our fears of an uncomfortable night’s sleep were allayed by the next morning. The body is a robust creation, and moulds and folds into the grooves and channels of its place of rest. Heavy intoxication also helped.

A couple of hours later, and we took the shuttle bus into Bilbao. We spent the day pottering about collecting supplies. Dan bought a miniature minion chair. Tom bought a giant can of peaches. Meg only bought normal sized things.

After a pizza in the park, we made our way back to the shuttle bus stop. It was located on one side of a multi-storey car park. The building was large and round and was bordered by road and pavement. When we arrived, we joined the back of the queue. Close behind us we could see the front of the queue, which almost stretched the entire way around the building. After an hour and a half of good old-fashioned queueing, a cultural trope the Basque’s had blatantly lifted from the British, we reached the front of the queue. Standing next to us was the middle of the queue, which we had lapped. At this point, the queue now stretched the entire way around the building, and then some.

Childish Gambino and Florence and the Machine were the heavy hitters of night number one. I heard Florence once knocked out a horse with a single punch. We arrived at the performance area and jostled our way into the middle of the crowd of the main stage, for Childish Gambino. This was after a fevered run down the hill from the campsite, skipping the queue for the shuttle bus, worried we might miss the beginning of Gambino’s set. Bobbing and weaving through walkers whose passion clearly wasn’t burning as bright as ours, we slalomed towards the stage area.

Fast forward fifteen minutes and Childish Gambino is jigging and jiving to ‘Redbone’. Thirty minutes later, wide-eyed and shirtless, Gambino performs ‘This is America’ to a rapturous reception. The performance was theatre. Tom described it as “ethereal with a slice of apple pie”, but, then again, he always was a pretentious tosser. Gambino’s amplified facial expressions and embellished gyration punctuated the performance. Falsetto shrieking and a disrobing process that took two or three songs to complete also featured. The crowd seemed euphoric from every angle – and I saw a few whilst I was staggering and scrambling through the masses to go for a wee. It wasn’t the sort of festival where weeing into a bottle and tossing it into the mixer was acceptable. Seb got hit in the head by one at a festival once and said it wasn’t particularly pleasant.

Following on from Childish Gambino, a couple of the gang ate a kebab. There’s nothing like following up a funk and soul laden set with a bit of doner to maximise satiation.

Heading over to the Gora! stage, we jumped into Parquet Courts lively set. We spent a lot of time in a rambunctious dance area the kids are calling a “mosh pit”.

Florence was next on the roster. That’s Florence from Florence and the Machine. Not the nurse or that place in Italy. Everyone always gets those three mixed up. Someone described her to me as a “warbling tart” before the festival. She does warble, and she warbles well. But warbling well alone doesn’t forge a great performance. Florence floats across the stage in a flowing frock to forge the flair of it all.

David Byrne’s surreal set featured on the Heineken stage on the second night. We arrived at the stage, to see a stage bare. Except, placed in the middle, lay a desk. Atop it, a brain. David Byrne emerges, lifts the brain aloft and begins crooning the opening lines to ‘Here’. A short time later, and Byrne’s entourage/band enter. Six men play a deconstructed drum kit. The others play constructed instruments. It was unlike the other performances in Bilbao. The band were completely mobile. Like a laptop or a game of travel scrabble.

The next night we opened with Young Fathers, with the enigmatic Kayus Bankole cutting all sorts of shapes across the Gora! stage. Triangles. Squares. Rhombi.

I watched Noel Gallagher alone. Apparently, base pleasures like the High Flying Birds were beneath the rest of the entourage. At one point, Noel made the first cautious steps into a pan-European language the continent had seen since Esperanto. Combining Mancunian and Spanish, the foray into bi-lingual patois went something like this: “Muchos gracias, this next one’s for all the la femininas.” Inspiring stuff.

Later that night, complete with Power Puff import Ace, Damon Albarn’s Gorillaz performed a marathon set that ran for a couple of hours. Wearing a stone island jacket and encapsulating the style of a cool friend’s cool dad, Albarn entertained the crowd in the small hours under a gentle shower of Bilbaine rain. It was refreshing on the sunburn.

The next morning, we departed the festival around 10:30 with the idea being to beat the rush. We did not, however, as everyone else had also had the same idea. Earlier that morning, sunburnt and hungover, Tom and I dismantled the tent.