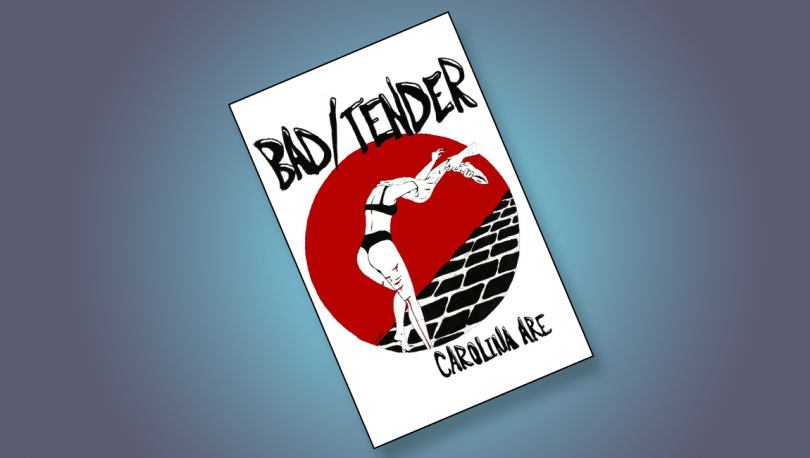 Carolina Are is a 25-year-old Italian/Londoner and multi-talented extraordinaire. Being a novelist isn’t the only thing she’s got under her belt – she’s also a pole dancer, performer, lecturer, PhD student and even writes her own blog where she writes all about her fascinating life. Not to mention she’s currently working in academia full-time teaching Criminology, Journalism and Social Media.

Carolina is truly the modern-day Wonder Woman. So naturally, when I got an email telling me all about her new book I was buzzing to read it.

Bad/Tender is Carolina’s debut novel, a coming of age story for the modern woman that claims to be the ‘anti-Fifty Shades of Grey.’ The novel follows twenty-something Italian/Londoner, Chiara, a recent university graduate who’s trying to figure life out.

At first glance Chiara’s just your everyday London living, nightlife loving, party girl, however she has a morbid obsession with death and runs her own Instagram page where she posts photos of dead things. But apart from that, her existence seems pretty unextraordinary – she does unpaid internships and lives in a tiny apartment which costs far too much money (pretty standard London living).

All that changes one night when she meets a bartender named L, a rough around the edges bad-boy type that looks malnourished and is way too into drugs.

At this point you’re probably thinking that Bad/Tender just sounds like every other contemporary novel on the market, but that’s where you’re wrong. In her novel, Carolina exposes the overused bad-boy trope and shows us just how dangerous fantasising the relationships of books like Fifty Shades of Grey or Twilight can be.

At first L appears to be your everyday nice guy, but as the relationship goes on cracks start to show and he begins to mentally and then eventually, physically abuse Chiara. He hits her, manipulates her and even rapes her and throughout it all Chiara believes that she deserves it, because he’s her boyfriend and he cares about her. This is one of the incredibly important things the novel discusses, rape is still rape even when it’s from someone you love, simply being in a relationship with someone is not consent, no matter how many times you’ve agreed to it before.

Another interesting aspect of the novel is the characterisation of Chiara, although she may sound like the typical damsel in the distress type, she’s not entirely blameless in the situation. Chiara finds that she has power over L and uses it to her advantage, she too manipulates and the pair of them together form this deadly, catastrophic cocktail of addiction and lust.

Although L is a completely despicable character who I literally hated throughout the entire novel, it’s important to recognise sometimes that abuse can come from both sides and one person’s darkness can feed the others.

The aftermath of abuse

Bad/Tender also discusses the aftermath of abuse in a very real and tough way. A lot of novels simply ‘gloss over’ recovery, but Carolina demonstrates the hardships and despair that is often faced with it. She shows the lack of support offered from institutions in the UK, the depression and hopelessness that is often felt due to this, and how talking therapies just don’t always work; they’re not some miracle cure that many books would have you believe.

The only way Chiara manages to deal with what happened to her is by accepting how toxic the relationship was, severing her ties and to spend some time on herself. Chiara takes a trip to the USA, where she realises that she doesn’t need a relationship to define herself and she learns to accept who she is – darkness and all – and makes the decision to make a fresh start. Here the book teaches us another important lesson, that it does get better, you don’t deserve the abuse and you can eventually get back to living life.

Bad/Tender discusses some incredibly important points which are often wrongly romanticised. The bad boy trope is one that’s been overused in today’s media but rarely has anyone called out the dangers of such a relationship. Carolina Are’s novel covers some crucial points which aren’t discussed enough in today’s society.

Bad/Tender is a coming of age novel that every young woman needs to read.

Check it out on goodreads.