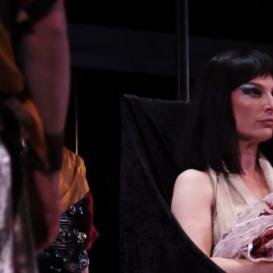 To commemorate the 400th anniversary of William Shakespeare’s death, Rae Coppola discusses Antony and Cleopatra (1606), and why she would have liked to have been the exotic noble Queen.

Set in 40-30 BC, the Elizabethan play Antony and Cleopatra is one of Shakespeare’s many tragedies. The plot focuses on the historical ruler of the Roman Empire, Mark Antony, and his lover Cleopatra, the last active pharaoh of Ptolemaic Egypt. The action portrays Antony’s inner struggle of wanting to do what is best for his people, and his desire to live with Cleopatra in Egypt. This inner conflict leads him to become involved in a war with Caesar, one of his fellow triumvirs, in which he is victorious. Soon after, upon hearing theatrical lies about his lover’s death, he commits suicide to be with her, and she ends the play by doing the same to be with him.

“In time we hate that which we often fear.”
– William Shakespeare, ANTONY AND CLEOPATRA#Shakespeare400 pic.twitter.com/CbXyBI2nfw

According to Shakespeare’s description, Cleopatra is a: highly attractive, loyal, over-theatrical character, and I would be honoured to have been her. Below I list the qualities of hers that appeal to me.

Cleopatra is one of Shakespeare’s most inspiring female characters, as she mixes the solid masculine qualities of Rome with the liquid feminine and spiritual Egypt. The blending of binary opposites creates ‘discandy’, thus causing an imbalance of power and blurring the gender boundaries noted in Cixous’s philosophy. In other words, Cleopatra remains collected and un-phased, a ‘marble constant’ (V.ii.240), both in the East and the West, stating, ‘I have nothing of woman in me.’ Her femininity is even hidden when Antony dies, and her rational thought process takes over, resolving to ‘bury him,’ as that’s, ‘what’s brave, what’s noble.” (IV.xvi.89–90) However, despite blaming her femininity for her downfalls, it is her femininity mixed with her masculine qualities that ensures her success as both a leader and lover, making her an ideal role model.

Cleopatra is extremely strong willed. For example, when her lady in waiting advises, “In each thing give him [Antony] way, cross him nothing,” Cleopatra replies, “Thou teachest like a fool; the way to lose him.” (I.iii.9-10) Her character was not afraid to discard advice, nor feistily disagree with the opinions of others. According to Antony “she is cunning past man’s thought,” (I.ii.7) and will not be walked over. Cleopatra proves this once Antony is dead to avoid becoming Caesar’s prisoner, and trophy to take home. Yet Cleopatra defies him, and instead takes her own life, provoking him even in death. Although disappointed, Ceaser admires her, ‘Bravest at the last / She levell’d at our purposes, and, being royal / Took her own way.’ (V.ii.18)

Described as a, ‘Gipsy,’ and enchantress who has made Antony “the noble ruin of her magic” (III.x.18), seduction comes easy to Cleopatra. Her exotic beauty and undeniable self-confidence enables her to captivate whomever she pleases with her open sexuality. Her persona is awe-inspiring, and perfected as if she is acting, ensuring she has full control of the stage and the literal as well as plot based crowd can focus on only her. Ever theatrical, but with genuine feelings for Mark Antony, she decides rather than to live without him after his death, to join him in the afterlife, believing that in a ‘new heaven’ their love could be eternal. However, even in death, ‘she would catch another Antony / In her strong toil of grace.’ (V.ii.345)

To conclude, Antony and Cleopatra is quite possible the most important of Shakespeare’s works, especially regarding women, as it is a major step forward for the (then) inferior gender to be described with masculine qualities without being seen as a danger to society. Cleopatra is a strong, loyal, perhaps even childish at times, role model, that all women should aspire to. Her idea of femininity being weak however, is wrong, and instead femininity should be drawn on as well as masculinity to achieve ultimate success.