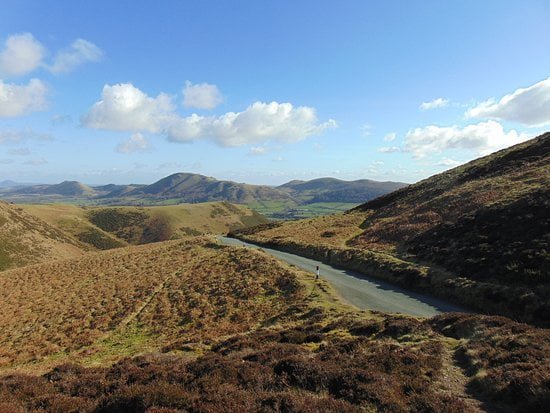 Stage 12 of the Tour de France has just been completed. A Welshman, described as a ‘Briton’ on a BBC Sport article, has just won the Alp d’Huez. With that he’s secured himself back to back stage wins. In tribute to Geraint Thomas, what follows is a tale about a Pole, and man of Jamaican descent, a plastic Scot and an Englishman, completing a similarly gruelling bike ride around 10 kilometres from Thomas’ native land. It wouldn’t be incorrect to use the demonym ‘Britons’ when describing these four fellows. In fact, I would imagine that will be exactly how the BBC describe the bunch of us when this story is scooped up by BBC Sport, as the definitive sporting story of the decade. That’s right, more damned definitive than that Leicester City malarkey in 2016.

As the doors to the transit are slammed shut, a gleeful cry of “you’re mine now, boys” comes from the up curled lips of the driver. He turns the keys in the ignition and speeds off. Over the sound of the engine rises the muffled harmonies of B.B. King and Eric Clapton, resonating from the cargo hold of the white van. I’m sat in the passenger seat, alongside Comrade Caleb. Driving the vehicle is a man we came to know as Rave Dave.

In the beginning, there were four of us. Comrade Caleb, Nice Andy, Jarek and myself set out on this hot and sunny Shropshire day to cycle to the peak of the some Shropshire hill, via some picturesque country pub. It was the sort of place Nigel Farage would have his picture taken to show he’s not lost touch with what it takes to be quintessentially English. The plan was we would catch a train back from the nearby town of Church Stretton to Shrewsbury.

We set off, stopped to apply sun cream, carried on for a bit, stopped for a water break, continued, tinkered with a flat-ish tyre, and so it went. This was the general run of things for the couple of hours it took us to reach some picturesque country pub.

Back to the van, and Comrade Caleb and myself sit on the two passenger seats in the cab. Upon Rave Dave’s strict instructions, Nice Andy and Jarek follow us on push bike at a discreet distance until we’re well past the police station. Once we’re out of sight of the diligent eye of the law, Rave Dave pulls over. He ushers the two boys into the cargo hold, and they lay their bikes next to mine and Comrade Caleb’s, and sprawl on the cold metallic floor of the van.

Nice Andy was well ahead of the pack on this trip. He’d done two or three shifts for Deliveroo during the summer, and the rest of us quickly accepted he was the most qualified to lead this expedition. He didn’t approve of Jarek’s frequent cigarette breaks, or mine and Comrade Caleb’s general malaise. But as a good leader bends to the will of his entourage, Nice Andy bent to the lackadaisical approach of the motley crew who weren’t professional cyclists.

We arrived at the picturesque country pub. On the bar was a selection of beer taps, mats and old fogeys. At one end of the bar, a dish containing roast potatoes and gravy lay in wait for the hungry fingers of the local farming community.

Back to the van, and Rave Dave stands with one arm leant against its bonnet. He raises his eyebrows and the words, “If you make it worth my while” come out of his mouth.

After three or four pints, which refreshed and dehydrated the pack simultaneously, we continued on our merry way. The difference between us and those stringy men who ride in the Tour de France was that the professionals would have stopped at two, possibly two and a half pints on such a warm day. In fact, Nice Andy had to stop at a corner shop to pick up a Crabbie’s at the next available opportunity, to quench his subsequent thirst.

Onwards with the expedition, and we’re reaching the peak of this tale. In fact, Nice Andy reached the peak far quicker than the rest of us, owing to his cycling pedigree, and the fact he was the only one not riding either: one of Jarek’s mum’s bikes; or Comrade Caleb’s little sister’s bike. But fate, the great equaliser, stepped in. Shortly after seeing Nice Andy ascend through the clouds and out of sight, he descended back through the clouds with an anguished look on his face. He had lost his phone and keys. I assumed that they had been eviscerated by the speeds he’d been hitting throughout this trip. He didn’t find this suggestion funny when he met us at the top of the hill, after he had found his phone and keys nestled in the bracken somewhere along the way.

Back to the van, and the four of us sit on the curb outside a Happy Shopper or some knock off supermarket of a similar description. If we were younger this would have appeared to the outsider as loitering. But as it was, we were all in our early twenties, with at least three quarters of our bicycle stock road legal/safe, and looked the part of avid summer cyclists.

We are stranded. In a small town, nestled deep in the Shropshire Hills. By night fall the place would be alive with hill-folk. It wouldn’t be safe for us flat-landers. A white van pulls up just down the road from us. With it, it brings hope.

At the bottom of the hill lies Church Stretton, and in it a train station, and our ticket home. At this point, however, the trip took a dark turn. There was no train service. Cancelled, to be replaced by a replacement bus service. A replacement bus service that did not allow bicycles on board. The realisation rocked the group. Comrade Caleb began shouting “Flipping heck” and “Oh crap!” over and over, whilst kicking the dirt. Jarek just sat down and had a cigarette. Nice Andy opened a second bottle of Crabbie’s. I wept.

We were at a loose end, and went and sat down on the curb outside a Happy Shopper or some knock off supermarket of a similar description, assessing our options, which we quickly realised we needed to work out before we assessed.

A van pulled up on the pavement just down the road from the patch of curb we were sitting on. A man slight of build, but big of heart as we would later discover, got out, and went into a takeaway. When he came out, we seized our chance, and Comrade Caleb and myself approached the small man. After enquiring after a minibus firm – of which he assured us were few and far between in the Shropshire Hills – we made the ask. The words “Grease your palm,” “Shrewsbury,” and “Completely fucked,” were used in the negotiations.

In the end he agreed to take us back to Shrewsbury, but told us he had to drop the takeaway back home, and presumably explain to his wife why he was giving four guys he’d just met a lift home. I imagine she was probably quite confused as her husband opened the front door to their family home and tossed the carrier bag containing the takeaway inside. He probably left in a blur, shouting a collection of broken sentences and explanations, in a desperate attempt to ferry us back post haste and get back to eat his takeaway whilst it still had the semblance of something like warmth.

After 15 tense minutes of waiting, the small man in the white van did return. With Comrade Caleb and myself in the front seats, and Nice Andy and Jarek occupying the cargo hold, Rave Dave drove off into the sunset.

Rave Dave: A small man with blonde hair, receding at the top. He spoke with a slight lisp, but had the playful demeanour of a happy child. He was a family man, complete with wife and kids – the exact number of which I forget. He had at least two, but definitely no more than six. I don’t remember exactly what he did for a living, but I think he might have said he was a mechanic, or an engineer, or something similar. He definitely wasn’t an actor, professional footballer, or paramedic. His name was David, or Dave for short. He put on illegal raves in forests with inflatables.