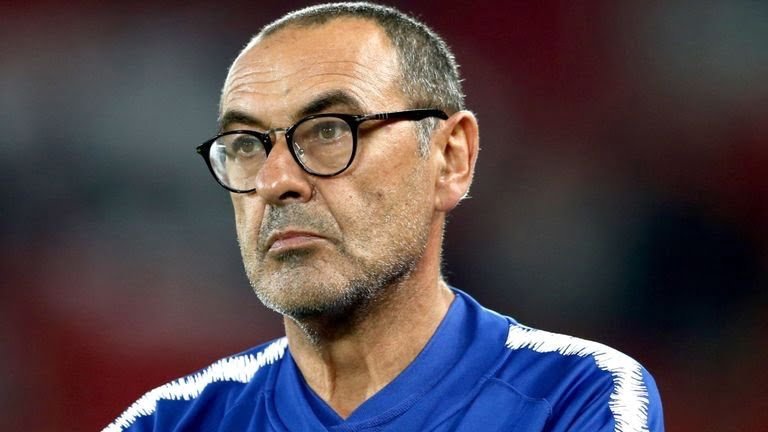 When it was announced back in July that Napoli coach Maurizio Sarri would become the new manager of Chelsea Football Club I began hearing the term ‘Sarriball’ a lot, whether it was online or from Chelsea fans excited to tell me how their club was about to blow the league out of the water with this new style of play. Now, just seven months into his first season in English football, Sarri is under immense pressure from his board, the fans and the media to deliver some answers after the Blues suffered their biggest ever Premier League defeat on Sunday, a 6-0 drumming at the hands of Manchester City.

It was clear after the first few minutes in this game that Sarri had told his Chelsea side to press City high and really take the game to them. A brave, but dangerous tactic to deploy at a ground where the home side exploit any sort of weakness they see in their opponents. The Sky Blues had already scored 43 goals in 13 league matches this season, and those games were against sides who had set up to defend. If Sarri’s tactics had worked and Chelsea became only the second team this season to come away from the Etihad with all three points then fair enough, it would’ve been a masterclass but that’s not what happened. In fact it seemed like Chelsea’s aggressive approach angered City, almost to the point where they sat back and said “woah, you’re going to come here and try play that way against us? No. We’ll show you what happens when you try that”. It was a relentless display from the reigning champions, but the Chelsea boss didn’t help the situation, simply by doing nothing at all. Usually when a team goes 3-0 down inside 20 minutes that prompts (multiple) changes to try and salvage something from the game. However the 60-year-old, not for the first time this season, stuck to his sarriball style, despite seeing it not work right in-front of his eyes. His stubbornness to stick with this style of play could see him lose his job.

These issues however have only arisen in the last few months. Chelsea, along with Liverpool and Manchester City, actually went unbeaten for their first 12 matches of the season and were going strong, whilst playing a lovely style of football. It was Everton who were the first team to workout how to stop the sarriball style, by nullifying Jorginho. The Toffee’s earned a respectable draw at Stamford Bridge back in November and that was because Everton boss Marco Silva realised at the heart of Chelsea’s success was Jorginho, their summer acquisition from Sarri’s old club Napoli. So stop him and you stop Chelsea. And that is what Silva got Gylfi Sigurdsson and Richarlison to do; anytime Jorginho dropped deep to pick up the ball smother him, don’t give him the time to pick that killer pass. It worked fantastically. In Chelsea’s next match they faced a Tottenham side who had obviously done their homework too as Mauricio Pochettino carried out the same tactics. He got Dele Alli and Harry Kane to press Jorginho, not giving the Italian any time and once more it worked brilliantly as Spurs raced into a 2-0 lead just 16 minutes in. The home side went on to win 3-1 and inflict Chelsea with their first league defeat of the season. Now my question is this; if Sarri can see that teams are starting to work out how to stop Chelsea’s way of playing, why not change up your style of play? I understand that he has come in and said he wants to Implement this certain way of playing, but there needs to be a plan B surely?  If you look at the match away at Arsenal in mid-January, Chelsea were completely out-played in the first 30/35 minutes and found themselves 2-0 down by half time but again Sarri made no changes, made no adjustments to the way he wants Chelsea to set-up despite it clearly not working. They lose again. The next fixture, away at Bournemouth the Blues ended up conceding four second-half goals. They were in a tight affair and it really could’ve gone either way but Sarri refused to change his set-up to allow Chelsea to go for the win. The recent defeat to Manchester City has to be the best evidence of why something needs to change though. This was one of the worst Chelsea performances I’ve seen in years. They wanted to press Man City high and force them into a mistake but all that did was expose the Blues’ midfield and defence and once the home side had scored a couple of early goals the natural reaction from the losing side would be to change up the style. Whether it’s a pride thing for Sarri, and perhaps if he changes the way his team plays that’s admitting defeat in his eyes, but if he doesn’t change something soon he could be on his way out because we all know Chelsea owner Roman Abramovich does not have the best patience.

One change I believe Sarri needs to make to this Chelsea team is put N’golo Kante back into the holding role. There is a reason this man has won the Premier League twice, along with the player of the season award in the last three years and that is because, when operating that CDM role, there is no-one better in the world than Kante. It truly is like having an extra player in your team when he operates in that position, he is unplayable. This season Sarri has pushed the Frenchman into a more attacking role to accommodate for Jorginho but it just doesn’t suite Kante and ultimately both Sarri and Chelsea are not getting the best out of him.

It still is early days for Maurizio Sarri and Chelsea, a new relationship between manager and club never clicks over night. Just look at Pep Guardiola; his first season at Manchester City wasn’t all he wanted it to be and there were many saying perhaps it wasn’t a good fit. Chelsea are still only one point out of the top four, in the Carabao Cup Final, in the later stages of the FA Cup and have the Europa League knockout stages coming up so it isn’t all bad. This still has the potential to be a very successful first season for Sarri. Whether he’ll see the season out yet is unknown.