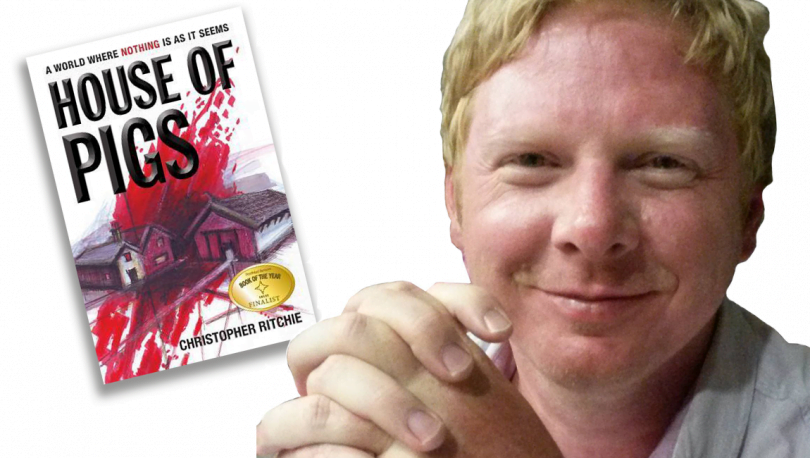 By lucky coincidence, and a very supportive publisher, I had the chance to interview award-winning author Christopher Ritchie last month. Chris is the author of four adult fictions and a series of children’s books. His first novel, House of Pigs was a finalist in the 2013 Indiefab awards, and his second, The ordinary, won the award two years later. I decided that this was someone I would immediately get on with when his answer to my ‘tell me an interesting fact about yourself’ question is that he can spell ‘supercalifragilisticexpialidocious’ in under five seconds.

Chris was born and raised in Walton-on-Thames in Surrey, where he still resides today with his family. His mother was a teacher, his father a journalist. “I followed in dad’s footsteps” he explained, “and nowadays work as a freelance writer and editor”. Chris is married with two children, Maddy, 10, and Henry, 8, who he describes to me as “awesome”. He tells me that his children’s series, Rebecca and George’s Detective Casebook, is largely based on Maddy and Henry and revolves around them travelling all over to solve crimes and mysteries. He speaks of his ambitions for the series, “I’m hoping the books will run into the dozens, so they will follow a realistic time scale as they grow older. Maybe in 15 years I’ll be writing them as adults.”

When asked what motivated Chris to start writing, he answered “dreams”. He was interested in writing as a child and, in middle school, he was pulled out of class to do a creative writing course in which 15 children had work printed in an anthology. But the idea for his first published novel came from a dream he had. “I woke up and thought, ‘Hey, that’s not a bad idea for a book,’ then immediately started writing it and about two years later, in 2013, finally got it finished.” Chris’s published work all starts as “fragments of stories and imagery which I then piece together”, and now he can’t imagine writing one which he doesn’t dream up. Following the dream, he spends a lot of time thinking and planning to come up with the final, coherent plot. “For House of Pigs particularly, a lot of the extra stuff came from time spent in the New Forest; there’s a sort of magical thing at play down there, and something quite dark, that inspires me”

House of Pigs is frightening and disturbing, aiming to push the reader’s imagination beyond the limits of ‘normal’. It all starts when officer Joe Gullidge, also known as ‘Gully’, is sent on a routine police call which quickly turns into a sequence of terrifying events. Gully is forced into a search for the truth, and must grapple with the difference between reality and that of a parallel world. Chris describes his protagonist as “husk, a shell, and occupying someone else’s place in the world. But as he comes to understand who and what he is, he tries his best to push back and be a force for good.” The novel is very reminiscent of Stephen King’s The Shining, which Chris pinpoints as his favourite book.

Chris’ unique way with words is something I have noticed throughout his books. He manages to stimulate your imagination so you feel like you are standing right next to the characters, but also feel absolutely terrified of the image he is painting. He names his parents as the source of his impressive vocabulary knowledge, as they are “both very good at English, sticklers for getting things right, and encouraging me to look at things from different perspectives”. Chris is fascinated by the many different words we can use to say the same thing, and he mentions that the lyrical comedy of Monty Python, Spike Milligan, and Tommy Cooper, among others, was his inspiration.

The ordinary, was Chris’s next novel, published in 2015. It is about “the spread of fear through a rampant global media, which manifests as an evil virus that makes the world sick”. Politically and socially, The ordinary conveys a number of key messages, including “concern about the increasing prevalence and acceptance of pornography, the global problem of sex trafficking, and mainly the way the media is deliberately dramatic and designed to frighten people”.

News is shown as quite problematic in The ordinary. It suggests that there are “so many negative messages delivered to us in the theatre of ’24-hour news’, and it feeds our fear…the media is to blame for most of our problems in society”. Chris believes this to an extent.

The other, perhaps more sinister, aspect of the novel is the debate of how well we really know our neighbours. Chris puts this into context, pointing out that everybody is a neighbour to someone, including criminals. “I find myself staring at buildings, wondering what goes on inside…who lives in them, what are they like, and what are they capable of? What secrets do they have? People’s personal demons lurk behind a thin curtain. Everyone’s on the verge of something.”

Writing is not Chris’s only creative outlet. He is also a great lover of making music, and has made two soundtracks to accompany House of Pigs and The ordinary. The albums are 15 and 12 songs long respectively, and all the music is inspired by the books, aiming to enhance your experience of reading them. You can find the albums on the Bandcamp app.  Chris’s musical history is rich. He can play the violin, the drums, the guitar, and has been in bands on and off since he was 15. About 15 years ago, he set up a studio with a friend and they made a lot of electronic music. Nowadays he makes it all using his iPad, “it’s incredible what you can do with one of those”.

The end of the world

Returning to Chris’s more recent writing, I first ask him what is the most important thing that a book should do? “A book just has to hold the reader’s attention, be that through excitement or mystery or whatever makes the reader want to turn the page.” He adds that there has to be enough ‘story’ there which unfolds at the right pace to make you want to read until the end. “Characters have to develop along with the story, which means drip-feeding characterisation throughout, so that by the end you care enough about them to want to see what happens to them.”

You certainly get this feeling with Stop the ‘Pocalypse’s protagonist, Marty. ‘Pocalypse was Chris’s third piece of adult fiction, and was originally published as a 5-part episodic story, starting in 2016, and later released as one book in July this year. The satire is set in a world which has all but destroyed itself due to political squabbling and growing racial, sexual, and religious tension. It is very clearly responding to occurrences on the world’s political stage in 2016-2017, but as Marty stumbles into his duty to save the world, it asks the timeless question: is humanity worth saving?

Chris’s idea for the story came this time from a daydream. “I was on holiday in Cyprus last summer and the news was full of Donald Trump beginning his Presidential campaign in the US.” The feeling that people can really make a difference interested him.  “I approached Brexit on the basis that if I voted, it would be my single vote that decided it…So ’Pocalypse reflects that: one man for good goes up against one man for evil. It goes a bit deeper than that too, because it also explores the idea that ‘nothing matters and everything matters’. We’re told the universe is infinite, and we are but tiny specks of dust floating in it for such relatively short periods, but what we do while we’re here does make a difference.”

‘Pocalypse confronts the intrinsic self-obsession which haunts society today, especially with the growth of social media. “There’s this giant ball of narcissistic chaos forming online. I’m convinced that when the apocalypse does come, people will be videoing it on their phones and it’ll be ‘trending’ on Twitter: #endoftheworld.”

I asked Chris to what extent he believed ‘Pocalypse could become true and he responded with a hasty “all of it!” Chris emphasises that he doesn’t want to come across as a doomsayer but admits that “whichever way I look at it, the world is becoming sicker; physically and psychologically”. Issues like domestic poverty, racism, sexism, and other prejudices are growing, while the government continues acting as if it is not accountable to us. “There’s this pervading ‘life goes on’ attitude, where people just get on with it. Out of sight, out of mind. Meanwhile, there are homeless people freezing to death and young kids stabbing each other on sink estates. The world needs a good kick up the arse.”

Chris’s fourth and most recent adult work is This is Where We Go When We Die, which, in Chris’s own words, is a “departure” for him from previous work. Starting in 1879, it follows a private detective called Norton Brand who lost his wife eight years previously, and then his detective partner a year later. Chris explained Norton is “hired by a housewife to see if her husband is being unfaithful, he witnesses a murder and is then drawn into a series of events that sees him becoming involved with an occult sect. It’s in the style of the old ‘Penny Dreadfuls’, a really dark gothic horror mystery with lots of twists and turns”. It is going to be published episodically, and part one is already available to buy as a Kindle exclusive, with the next one coming out in the new year.

With this departure and movement into a different genre, Chris hopes to demonstrate his range as an author. “For an author to stand out, I think, he or she needs to create a diverse body of work… Although I’m not motivated by money and don’t feel any inclination to become famous, naturally I want people to read and enjoy my books.”

When asked what other genres Chris would like to tackle he replied, “I’ve been considering writing what some label as ‘literary fiction’.” One specific idea he has is based on the romance between Meghan Markle and Prince Harry, with elements of Diana and Charles thrown in. It would be a “serious book that looks at the emotional and psychological side of entering into the royal family – kitchen sink drama rather than satire”. Unfortunately, because this idea didn’t come to Chris in a dream, he said it may not happen.

The future looks bright for Chris. He plans to “keep transferring [his] dreams to the page for as long as he can”. His Rebecca and George casebook series will continue, and as well as this he is currently working on a screenplay called Millionaires, which he intends to finish in the next year, as well his next full novel, which is called Nuclear Rock. His final comment, “best crack on then”, is an appropriate description of his life right now, with a lot of writing on the go.

If you would like to buy any of Chris’s books, you can find them on GB Publishing’s website, www.gbpublishing.co.uk or on Amazon. They are all available as E books.

If you would like the chance to win a free copy of House of Pigs, The ordinary, or Stop the ‘Pocalypse, all you need to do is tweet @Kettle_Mag with the name of the book you fancy winning and tag Chris in your tweet – his handle is @theordinarypigs. The giveaway is open until Sunday 31 January, and winners will be selected at random and announced in the following week.