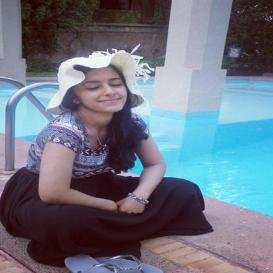 At Kettle Mag the editors remain hidden away in Kettle towers occupying themselves with ideas, proofing, tweeting and keeping their ears tuned to the latest news. But what do we know about these busy creatures? Here at Frivolity over the coming weeks we intend to find out…and this week we discover all about Sophia Bi, travel editor.

My parents don’t know this about me but…

I love eating raw lemons and sprinkling them on my food sometimes, even though they’re very sour.

When someone says the word kettle, what is the first thing that springs to mind?

How long after you wake up do you check your phone?

After five minutes, it’s become a force of habit to scroll through my news feed, check my emails and look at today’s weather.

Stranded on a desert island you wouldn’t be without…

After watching Life of Pi I would say my family or friends otherwise I’d lose my sanity!

What is the most revolting food you’ve ever eaten?

I tried seafood once and ate prawn, never again..

Which country that you’ve not yet travelled to is on your bucket list?

What is your favourite form of transport?

Aeroplane whenever I’m going on holiday, I like to sit next to the window seat and look down at the breath-taking view beneath me.

On the @TPEXPRESSTRAINS to Manchester Airport and it’s been delayed for over half an hour. #devastated

If you couldn’t edit the travel section for Kettle, which section would you choose?

They’re all looking pretty amazing at the moment but I think I’d choose F1, especially as the new season starts next week!

Glad to announce i’m officially the new Travel Editor for @KettleMag So excited to be joining a wonderful team of writers and editors ??

Between the two I’d say Rugby as Football never seems to interest me…(What?? And you were doing so well with the coffee answer! Ed)

As someone who was born in Manchester one of the major cities in England, I would have to go with beach near the ocean.

Android seems to be working perfectly fine for me so far..

If you were a punctuation mark, what would you be?

Quotation mark because I always have something to say and tend to talk nonstop..

Supporting people through hard times, my funny sense of humour, passing my wisdom and knowledge to others and trying to make a change to the world in the best way I know how to.

Have you ever volunteered for anything?

In the past I’ve helped fundraise events and raise money for Cancer research and British Red Cross with my friends. I also adopted a Bengal tiger from India and also a Snow Leopard for the World Wide Fund for Nature organisation (WWF) that helps protect endangered wildlife, environments, tackles climate change and promotes sustainable use of resources. I get regular updates about my adopted animals every two months.

Which emoji do you use most frequently?

The Smiling Face with Open Mouth and Smiling Eyes, I’m always having a laugh with my friends

What was the last song you listened to on your ipod/phone?

What is your most over used word or expression?

What keeps you awake at night?

Planning what I should be doing the next day, I need to learn to live in the present and stop overthinking more often.

9am starts all week are just horrible. If you find me sleeping on the floor just leave me there for a good few hours…#needcoffee