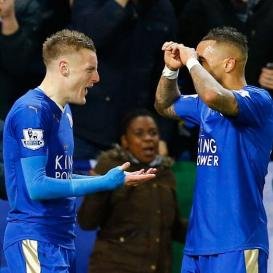 The 2015/16 Barclays Premier League is shaping up to be a memorable campaign. With lots still to unfold as it stretches beyond the mid way point, we take a look at what the season has given us thus far.

If there’s a stand out feature of this seasons Barclay’s Premier League it has undoubtedly been the unpredictability, competiveness and the regularity at which “upsets” have occurred.

Now this has always been touted as a hallmark of the Premier League in comparison to the top tiers of Europe’s elite leagues. However, this season seems to have elevated beyond the usual realms of unforeseeable results. We’ve seen Slavin Bilic’s West Ham pick up thoroughly deserved away wins at the Emirates, Etihad and Anfield, witnessed Liverpool demolish Chelsea and Manchester City before losing dismally to Palace, Newcastle and Watford.

Many teams have looked devastatingly good one week only to flounder the next, Arsenal’s recent thumping at the hands of Southampton serving as one of many good examples. Arsenal themselves, alongside Manchester City (and possibly Spurs) are most people’s tip to battle it out for the title but neither are mounting a romp towards the summit as defending champions Chelsea did last season. Both have already lost more games than the blues did in the whole of the 14/15 campaign.

Results on the European stage have been alarmingly lacklustre but ,speaking purely from an entertainment perspective, on the domestic front the openness of the Premier League this season has been superb.

There are a number of reasons as to why this has occurred but most notably has to be the ability of the so called smaller clubs to flex their muscle in the transfer market and string together impressive squads that are capable of toppling the big boys. Looking at the stand out performers there is a noticeable trend.

In this year’s transfer market, Stoke City have invested £20.1m dwarfing their 2014/15 spends which stood at just £1.26m. Leicester’s spending this season stands at £30m in comparison to £16.2m in the previous campaign and West Ham have also bolstered their spending power by £8 million as well as securing loans for the likes of Alex Song and Manuel Lanzini.

Of course, it isn’t as simple as chucking a few extra million at the squad, both Everton and Crystal Palace for example have so far spent marginally less than the 2014/15 season, what’s more important is the calibre of these incoming players. French Internationals Dimitri Payet and Yohan Cabaye have been impressive and tremendously effective additions to West Ham and Crystal Palace respectively.

Stoke City can boast the aquisition of three champions league winners in their ranks, with Bojan, Ibrahim Affelay and Xherdan Shaqiri all contributing to the club’s rise from lower mid-table mediocrity. Newcastle United may be performing below par but the signing of Georgio Wijnaldum has been one of their biggest positives, a man who scored 14 goals in 33 games from midfield for Dutch champions PSV Eindhoven in 14/15. Furthermore examples of this include Odion Ighalo, Toby Alderweireld, Riyad Mahrez, Saido Mane, Andre Ayew and N’Golo Kante.

Whether it be on the pitch or off it, the gulf between the Premier League’s top teams and the previous “also ran’s” appears to be shrinking. Only time will tell if it shall continue, but for now it’s enthralling and it certainly makes for better viewing every Saturday on Match of The Day.

English Talent ahead of the euros

The word impressive would be an understatement regarding England’s Euro 2016 qualification. Played 10, won 10, 31 goals scored and only 3 goals conceded. Whilst it perhaps doesn’t quite tell the full story, question marks still remain over England’s ability against stronger opponents, there’s no denying it’s a solid platform to build on ahead of what is a pivotal tournament for Roy Hodgson and his men.

On a worrying note the current Premier League season has proven a sour one for some of England’s more regular and experienced players with Gary Cahill, Wayne Rooney, James Milner, Jordon Henderson, Daniel Sturridge, Danny Welbeck, Michael Carrick, Phil Jones, Adam Lallana and Jack Wilshere all struggling with either consistent form or fitness.

What a relief it must be then for both Hodgson and fans across the country to see the tremendous rise of other English prospects this season. Spurs have perhaps been the leading light on this front. Both Dele Ali and Eric Dier have proven driving forces behind what seemed an unlikely title challenge and have already been rewarded with England call ups. Harry Kane has well and truly put to bed concerns he was a one season wonder, netting 15 goals in 24 appearances and looking every bit the part of an English number 9 capable of leading the line.

In Merseyside, Ross Barkley has rediscovered and gone beyond the form that saw him earn a World Cup call up in 2014 with a range of impressive displays that have seen him score 6 goals and provide 8 assists. His team mate Jon Stones’ reputation grows with every game and has been a tremendously composed and assured presence for a centre back of his age. Keeping on the theme of centre backs, Chris Smalling has transformed himself into an ever present of Manchester United’s backline and which is more, his consistency has been coupled with a new found leadership.

It certainly bodes well for England’s backline, if not for Gary Cahill’s chances as he remains behind John Terry and Kurt Zouma in the pecking order at a stuttering Chelsea. Before his horrific injury Luke Shaw was looking every bit the part at left full back and fans can only hope he returns to action and rediscovers such form as swiftly as possible. There must of course be mention of Jamie Vardy, whose goal scoring record and ability to give defenders nightmares with his movement week in week out gives Roy Hodgson another selection headache he’ll be happy to have.

On a final note, Jack Butland has been an absolute rock in between the sticks for Stoke all season and whilst nothing Joe Hart has done warrants his place being under threat it’s refreshing to see two England goalkeepers looking sharp ahead of a major tournament.

It’s important not to get carried away with these players, too many potential English prospects have suffered the hyperbole of their talent only to see form falter or not translate to the international stage. However, it should undoubtedly give us reason to be hopeful that, so far in this campaign, young English players are not only proving themselves in the Premier League but starring in it.

Watford have evidently been the stand out performers, but whilst Norwich and Bournemouth’s league positions may suggest nothing spectacular, along with Watford, their approach to life in the top flight has been a breath of fresh air. Three key factors seem to underline this approach, starting with the men at the helm. With all three promoted sides you get the feeling their teams are in sync with the manager and all playing for him.

The management merry go round of the modern game dictates that a manager’s job is rarely a poor run of form away from being under scrutiny but all three men seem to look stable and assured in their roles at the club. Most notably Eddie Howe who’s earned heroic status at the club by guiding them from the brink of League 2 relegation in 2009 to the Premier League just 6 years later (with a stint at Burnley coming in 2011-12).

Furthermore, the way the promoted sides have played this season has been admirable. Alongside Leicester, Watford have helped promote the revival of a 4-4-2 system now based on a hard working front two, high pressing and deadly counter attacks. Bournemouth have had no shortage of plaudits when it comes to their willingness to play with expression and fluidity.

They’ve averaged 51.5 per cent possession away from home so far this season and frequently been praised with the old cliché’ of playing football in the right way. Even more impressively, in recent fixtures they have also displayed an ability to dig in when necessary. Clean sheets away at Leicester (with 10 men) and Chelsea as well as holding out for victory against Manchester United being evidence of this. Norwich have perhaps been the least sparkling of the three, but outside of the top 6 only 4 teams have outscored the canaries.

Whilst Alex Neil will know resolute defending is often the order of the day for promoted sides to survive, Norwich have shown capabilities going forward although January investment in this area may well be required.

On a final note, it’s refreshing to see all three promoted teams retaining the core of their promotion gaining squads. Week in week out 8 or 9 of Bournemouth’s starting 11 are the same men who guided them to the top flight, with the likes of Marc Pugh, Harry Arter, Charlie Daniels, Adam Smith, Steve Cook and Simon Francis having been with the Cherries since their League 1 days. Norwich too have kept their Championship 11 largely intact with Mbokani and Brady the only signings to make over ten appearances for the canaries.

It may seem contradictory to note that Watford were indeed the most active in the summer transfer window but amongst their most impressive performers have been Gomes, Cathcart, Watson, Deeney and Ighalo all of whom were playing Championship football for them last season.

Undoubtedly the story of the season is Leicester City. Many have been waiting for the bubble to burst but that has yet to come and looks increasingly unlikely that it will. What was seen a positive start that would help Leicester in their ultimate goal of safety soon translated into an impressive extended run of results that saw them maintain their position near the summit.

It was then predicted they would flounder over the Christmas period with a tough run of fixtures but they navigated that well with draws against both Manchester clubs and victories over both Chelsea and Everton. Leicester now stand joint top of the table in February and are no longer just defying the odds but seen as genuine contenders for a top four spot, if not quite the title. What an achievement it has been for Leicester and their story this season is the prime example of the new found competitiveness within the Premier League that was discussed earlier.

Leicester are the league’s second top goals scorers and the impact of both Jamie Vardy and Riyad Mahrez has certainly been the catalyst this, contributing a combined total of 43 goals and assists thus far. They’ve benefited from a highly functional 4-4-2 system that places an emphasis on devastating counter attacking football.

Kante and Drinkwater are immensely important in providing the legs to drive this transition from defence to attack whilst in Wes Morgan and a rejuvenated Robert Huth they have a solid pairing behind them. Formally nicknamed “the tinkerman” Claudio Ranieri has been anything but this season, playing with a similar eleven week in week out which has bred unity and harmony within their play.

Across Europe, teams coming from outside the upper echelons of their league and mounting title challenges is nothing new. Lille secured the Ligue 1 championship in 2011, Alkmaar claimed the Eredivisie in 2009 and Stuttgart were Bundesliga champions in 2007. However, in recent years this has become increasingly uncommon, especially in the elite leagues of Germany, Spain, Italy and up until now, England.

This time last year Leicester City were doomed for relegation and having survived will have began the season with modest hopes of a stable mid- table finish. Making their rise up the league all the sweeter and more staggering. Whilst it may well not last, it is at the very least a massive positive for all Premier League clubs who strive to better themselves and challenge towards the top.