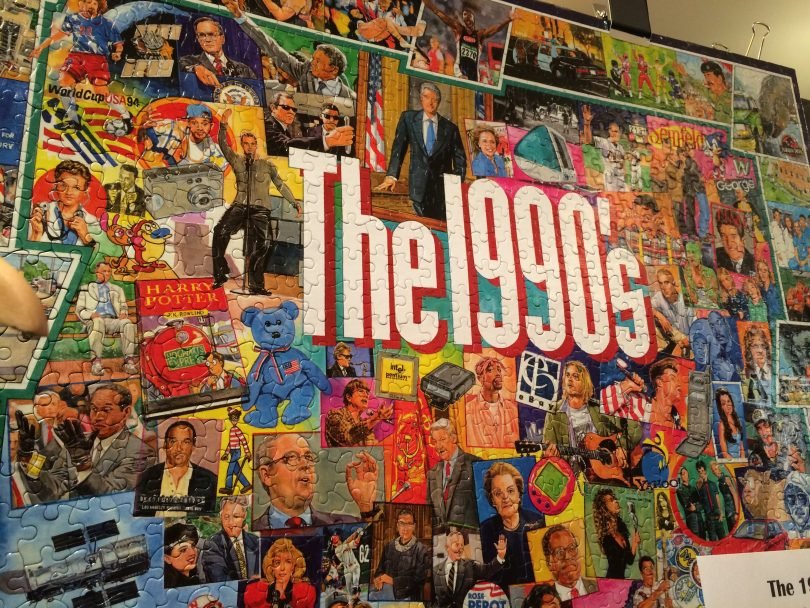 Would you believe that the end of the 1990s is twenty years ago? Looking back (I’m thinking the time between about 1997 and 2002), it brings so much nostalgia that the decade has become symbolic of a carefree childhood. It was a time before iPads and, for most people, the internet. A blissful period of odd toy crazes, fantastic television and a renaissance in British sport and politics after the depressing and volatile nineteen-eighties.

I remember the nineties only briefly, but when you see these ‘Only 90s Kids Will Know’ things then it all comes flooding back. Swapping Pokemon cards at school- ‘got…got…need’- watching Dexter’s Laboratory on Cartoon Network or the live-action Kenan and Kel on Nickelodeon. For those that didn’t have cable telly (I went years without it in my house) there was that odd show about the enchanted fifty-pence piece- The Queen’s Nose- or the brilliantly simple Chucklevision which brought laughter to me and to you for years.

There were Freddo’s, Taz bars, penny bubblies, pick ‘n’ mix from Woolworths and the changing of Opal Fruits to Starburst. There were raging schoolyard debates regarding Sunny Delight turning kids yellow and whether Dennis Bergkamp was better than Michael Owen. The late 90s has always had that sunshine-tinged nostalgia about it. The country was going great guns under Blair, the Britpop boom made way for cheesy, bubblegum pop like Barbie Girl or Blue Da Ba Dee…what a time to be a young kid.

Alongside the things we remember most were the weird crazes. I still have no idea what a Furby is supposed to be. How did you feel when your Tamagotchi died? Who else first learned French words from Tilly in Tots TV? It’s funny because the kids these days (here’s my old man rant) have no idea how to do anything without the use of touch screen this and Siri that. It’s sad that the days of climbing trees in the summer, whacking your ankles on your scooter and tuning into Johnny Bravo are so far in the past.

I was born in 1993, the year that the cult Halloween classic, Hocus Pocus, was released; a time when you could go into the corner shop, get a Panda pop and a bag of sweets and still leave with change from a quid. Technology has advanced so far in that time, it’s unreal. Remember the old Nokia phones? Playing Snake and going through the ringtones for entertainment while you were waiting for your mum to come back with new batteries for your Walkman? Those were the days.

When I first started school, we were right in the thick of the Pokemon craze. The shiny Charizard was the one that you had if you wanted to make a serious statement. That statement presumably being that you were top of the swaps and had managed to somehow trade your Diglet or your Pikachu for something better. It was like being a stockbroker, it really was. I wonder how many people made their first, tentative steps into business by trading packets of Tangy Toms and shiny Venusaur cards? It’s very likely, if you think of it like that.

While we’re on the subject, did anyone else have an extensive collection of fake tattoos hoarded from many packets of chewing gum? It begs the question again, did people’s love affair with tattoo sleeves and piercings begin with a rub on-rub off scorpion on their arm? There was kudos to be had if you had fake skull and crossbones on your bicep when you were about ten years old.

The heroes of the late nineties/early 2000s were some of the most random celebrities you could imagine. Nowadays it is Premier League footballers, mega-selling recording artists and Hollywood actors that are in the public eye. In 1999, it was the likes of Neil Buchanan from Art Attack that were seen as heroic visionaries of the move into the twenty-first century. To be fair, I learned how to make a massive portrait of myself using old bin bags, traffic cones and discarded shoe laces from that show. There was that talking, grey head (called, inventively, The Head) that explained why PVA glue was so incredibly important and that anything could be artistic as long as you had a dry-wipe marker pen and some macaroni. Good times.

It was a time dedicated to the excitement of non-uniform day at school or arguments with your siblings about whether Ed, Edd or Eddy was your favourite character. By the way, it’s the criminally underrated Rolf that wins that debate, as he munches down on his beet with his weird accent that you can never quite pinpoint where he’s supposed to be from. Through all this popular culture came phenomena such as vanilla flavoured Monster Munch, endless Simpsons merchandise including the odd Krusty Cola, a yellow-coloured drink that I was sure I’d dreamt up but research has since proven me correct and- who could forget this- THAT trainer advert where the giant, fat stomach chases a man through streets while a thumping soundtrack of techno reaches its crescendo. The advert reaches its conclusion with ‘Belly’s gonna get ya’ flying off the edge, a victory for fitness and for trainers. Ahh, the blissful period before YouTube made us desensitized to weird videos.

So, put down your smart phones and stop fiddling with your wireless everythings…there is pop culture to explore.